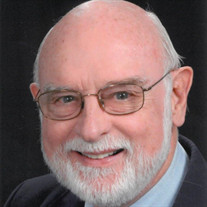 Billy Franklin Allen, husband, father, friend, and antique dealer, born August 13, 1944 died on February 3, 2022 after an extended battle with progressive supranuclear palsy. He was preceded in death by his sister Nancy Allen, and his parents Frances Wade Allen and Henry Grady Allen, of Cartersville. Billy moved to Atlanta as a small child. He graduated from Roosevelt High School in 1962, worked at Newcomb and Boyd Engineering as a draftsman, and joined the Army in 1965. After training at Fort Devens, Massachusetts, he became a Morse Code Interceptor, and was stationed in Ankara, Turkey for three years. He was honorably discharged in 1969, and went back to work for Newcomb and Boyd. Billy was considering reenlisting in 1970, when he met his future wife, Juanelle Williams, while attending church with a friend. Billy and Juanelle were married later that year by the Reverend Charles Stanley. Billy became a noted Art and Antiques dealer and collector, giving talks and seminars on Early Southern Furniture and Pottery. Many fine pieces he discovered have been placed in museums. Billy and Juanelle welcomed a son, John, in 1975. They moved to Commerce, GA in 1979 where their daughter, Becky, was born later that year. Billy and Juanelle joined First Baptist Church where he was ordained as a deacon and taught the men’s Sunday School class. They later moved their membership to Madison Street Baptist, where he remains a member. Billy is survived by his wife of 51 years, Juanelle; his son John Allen and daughter-in-law Maria Kimberly (Hyvinkää, Finland); daughter Becky Allen Huss and son-in-law David Huss (Commerce, GA); and four grandchildren Leila, Juhani, Tapio, and Elli. Memorial services will be held at 3 PM, Sunday, February 6 at Madison Street Baptist Church with Rev. John Turlington, Rev. Ray Morris, and Rev. Mike Ricks officiating. The family will receive friends at the church Sunday from 2 to 3 PM. In lieu of flowers, please donate to CurePSP at www.psp.org or to Madison Street Baptist Church. Little-Ward Funeral Home, Commerce is in charge of arrangements.

Billy Franklin Allen, husband, father, friend, and antique dealer, born August 13, 1944 died on February 3, 2022 after an extended battle with progressive supranuclear palsy. He was preceded in death by his sister Nancy Allen, and his parents... View Obituary & Service Information

The family of Mr. Billy Franklin Allen created this Life Tributes page to make it easy to share your memories.

Send flowers to the Allen family.