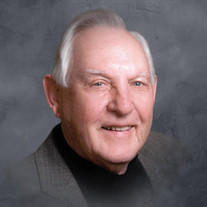 Robert Alvin (“Bobby”) Lewallen, Sr. passed away peacefully in his home on Tuesday, January 26, 2021. He is survived by his wife, Linda Anne Gardiner Stewart Lewallen, and his sons Robert Alvin (“Al”) Lewallen, Jr. (Vanessa) and Steven Walker Lewallen (Amanda). He is also survived by step-sons James Donald Stewart, Jr. (April), Stanley Gardiner Stewart (Courtney), and David Russell Stewart. His grandchildren are Nancy Lewallen, Kathryn Lewallen, Lauren Lewallen, Kali Stewart Huff (Matt), Jamison Stewart Worley (Matt), Bri Stewart Buchanan (Tom), and Chloe Stewart. He is also survived by three great-grandchildren. He is predeceased by his wife, Jacquelyn Cheek Lewallen. Bobby was born on March 4, 1930, during the height of the Great Depression in a two-room house in rural Banks County. He proudly served as a Corporal in the Korean War where he was stationed at the 38th Parallel north of Seoul, South Korea. After the war, Bobby attended Piedmont College, where he was a pitcher on the baseball team, and the University of Georgia, where he obtained a Master’s degree in Education. He then began a long and prestigious career as a teacher and school administrator, including serving three terms as the Banks County Superintendent of Schools. Among his accomplishments were the desegregation of the county schools and the beginning of the Banks County High School football team. Bobby was devoted to his family, church, friends, and community. He was a devout member of the Homer United Methodist Church, including serving on the administrative board and as Sunday School teacher. He especially enjoyed his role as church historian and writing his columns on Homer history. He was also extremely active in the community as a member of the Masonic Lodge, the Gideons, the National Rifle Association, and the American Legion, as well as an organizer of the Sunday School Celebration and the Homer Fall Festival. Bobby was a skilled marksman, an avid bird watcher, and an all-around outdoorsman. He especially enjoyed going fishing and playing in a card game of “setback” with friends. Bobby was also a season ticket-holder and enthusiastic fan of the University of Georgia Bulldog football team. Bobby will always be remembered as a friendly, honest and humble man who touched many lives around him. He will be sorely missed by his family and all who knew him. In lieu of flowers, the family is requesting that donations and gifts be made to the Homer United Methodist Church in Homer, Georgia. Graveside service will be held Friday, Jan. 29th at 3:00 PM from Banks Memorial Gardens with Rev. David Collins officiating. Those planning on attending the service are asked to social distance and wear a mask. Bobby will be opened for viewing for friends at the funeral home on Thursday from 11-4:30 PM. Little-Ward Funeral Home, Commerce is in charge of arrangements.

The family of Mr. Bobby Lewallen created this Life Tributes page to make it easy to share your memories.

Send flowers to the Lewallen family.