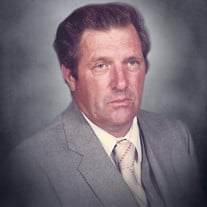 Mr. Dwayne Pascal Duncan, age 89, of Nicholson, GA died Sunday, February 10, 2019 at St. Mary’s Hospice House. Mr. Duncan was born in Commerce to the late Pascal and Wilda Chandler Duncan and was the oldest of four boys and the last living of his siblings. Mr. Duncan is survived by his sons, Jerald Duncan of Woodstock, Joel Duncan of Nicholson, Jeffery Duncan of Danielsville, and Jimmy Duncan of Peachtree Corners and his daughter, Vicki Hendricks of Shelby, NC. Born in 1930, Mr. Duncan grew up during the great depression, which influenced his entire life. He was a veteran of the United States Army and a retired mechanic. Those who knew Mr. Duncan can attest he never fully retired and could be found most days working in his wood shop, garden or chicken house. He used his woodworking skills in a pallet business with his sons, and he also enjoyed making rocking chairs, swings, bird houses and other popular wood items for local craft fairs, Girl Scout troops, company picnics and of course, his family. Mr. Duncan had a passion for barbeque and made delicious stew and smoked pork. He was known in the community for his strong work ethic, loyalty and kindness – always willing to lend a helping hand. To his family, he was lovingly known as Dad, Papa Duncan, PawPaw, Unkie, Great Granddad, Pop and a long list of other names created by an adoring fan club of 18 grandchildren, 33 great-grandchildren, five great-great grandchildren, plus nieces, nephews and greats, who he loved to hear from and brag about. The family was blessed with his integrity and humility and through his life example, his legacy lives on in all who knew and loved him. Funeral services will be at 11 AM, Wednesday, February 13 at the chapel of Little-Ward Funeral Home with Rev. Doug Duncan officiating. Interment will follow in Jackson Memorial Park. The family will receive friends at the funeral home Tuesday from 5 to 8 PM. Little-Ward Funeral Home, Commerce is in charge of arrangements. Flowers are accepted, or donations may be made to St. Mary’s Hospice House.

The family of Mr. Dwayne P. Duncan created this Life Tributes page to make it easy to share your memories.

Send flowers to the Duncan family.