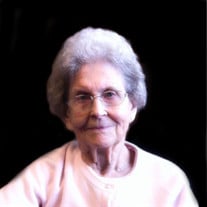 Edna Catherine Morrow Colvard, 93, of Hull, went to be with the Lord on Tuesday, April 30, 2019. Born in Anderson, South Carolina, she was the daughter of the late Ernest H. and Flora Little Morrow. She was preceded in death by her husband of almost 60 years, Carl Colvard; a baby daughter, Carol Ann Colvard; a son, Robert Colvard; and a son-in-law, Jimmy Lyle. Survivors include her children: Barbara & Tom Davis of Hull; Betty Jean Lyle of Winder; Randall & Janet Colvard of Hull; Sandra Colvard of Jefferson; and Susan Colvard of Hiawassee. Her grandchildren are: Durin Eberhart; Brian Davis; Wendy & Jimmy Chambers; Tammy & Ron Hester; Russ & Julie Davis; Renee & Carey Cooper; and Nick & Pamela Colvard. She has twelve great-grandchildren: Sam Eberhart; Hunter Cooper; Mitchel Chambers; Tom Eberhart; Megan Davis; Jarrett Cooper; Mason Chambers; Zach Hester; Colin Davis; Ryan Davis; Owen Colvard; and Olivia Colvard. She has a number of very special nieces and nephews. She became a Christian while living in Jefferson, attending Faith Baptist Church. After moving to Madison County, she joined Madison Street Baptist Church in Commerce, where she was a member of the choir and served as a Sunday School and Bible School teacher for first-graders. She cherished her years of teaching the little ones. She was awarded perfect attendance pins for eleven consecutive years. When traveling to Commerce became difficult, she moved her letter to Union Baptist Church in Hull, where her heart remained until the Lord called her home. After the death of her husband, she began attending the Madison County Senior Center, where she found many friends who blessed her life. It was the highlight of her day to go there and fellowship with the other seniors. For most of her life, her profession was as a homemaker. She worked tirelessly for her family. Services will be held on Saturday, May 4th, at 2 o’clock in the chapel of Little-Ward Funeral Home in Commerce, with Dr. Billy Owensby officiating. The family will receive visitors on Saturday from 12 until 2. Burial will be in Woodbine Cemetery in Jefferson. Little-Ward Funeral Home, Commerce is in charge of arrangements.

Edna Catherine Morrow Colvard, 93, of Hull, went to be with the Lord on Tuesday, April 30, 2019. Born in Anderson, South Carolina, she was the daughter of the late Ernest H. and Flora Little Morrow. She was preceded in death by her husband... View Obituary & Service Information

The family of Mrs. Edna Catherine Colvard created this Life Tributes page to make it easy to share your memories.

Edna Catherine Morrow Colvard, 93, of Hull, went to be with the...

Send flowers to the Colvard family.