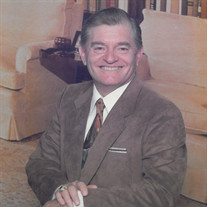 EDWARD KING LINDORME JR. ~ A Life Remembered December 25th, 1930 – January 5th, 2020. It was Christmas day 1930 at a home in Ben Hill, Ga. in Atlanta, when Ida Susan Medlock Lindorme gave birth to her first child, naming him Edward King Lindorme Jr., after his father Edward King Lindorme Sr. The depression was ending so Ed grew up learning strong Christian family values, often visiting his grandfather Medlock, ‘down on the farm’. Granddaddy was a blacksmith, so ‘Jackie’ (as they called him) learned early, all there was to know about saddle horses, cattle and the land. Jackie attended Murphy Boys High School, graduating class of 1948. During these years, he often went horse backriding with his good friend, Lee Bivins who one day had to go by his cousin’s house to pick up a saddle and it was there, that he met Barbara Augusta Denk. Barbara, affectionately known as Bobbie, quickly became the girl of his dreams, our mom and lifelong for a lifetime sweetheart. Now, for those that know, know Bobbie is a horse lover; always has been, always will be. The only thing Bobbie loves more than horses? Well, that’s Ed. Needless to say, they dated, often holding hands while riding and going to high school dances. As mom puts it, when we would jitterbug, the floor would clear and your father, well, he sure is a handsome man! College days came quickly, so Dad with his interest in medicine first attended Emory University in Atlanta but shortly transferred to the University of Ga. to study veterinary medicine preferring to be a gentleman farmer, loving the land. Quickly becoming a fan, Ed’s been a bulldog ever since! When the Korean War came, Ed became active duty with the Air Force deploying overseas to fight in the war. Ed was 1st Lt., 24 oct 53, RegAF with honorable discharge from Biggs Air Force Base, Texas 15 Jun 55. It’s while serving that Ed married his sweetheart Bobbie on March 29th, 1952. Once out of the service, the newlyweds settled in Atlanta and Ed began his career in the ‘chicken business’. Starting out at Vantress Farms, Inc. his early days were full of adventure and as God blessed the young couple with 3 daughters, Andrea Louise Lindorme, Patricia Sue Lindorme and Barbara Ann Lindorme, they chose Chamblee Ga as the place to raise their children through high school (with horses in the back yard of course). While Ed’s career led him into sales, traveling large territories selling veterinary pharmaceuticals to the poultry industry, the family’s pursuits were often up in banks county where they would spend summers ‘at the ranch’. The whole family rode horses and while dad was building fences and working the cows, the kids would be tearing down beaver dams and picking blackberries. As the children grew and went to college, Bobbie and Ed retired, building their retirement home and current residence at 980 Bennett Road, Homer Ga. 30547. A strong evangelist at heart, Ed’s sunset decades were full of working his cows and telling people about his lord and savior Jesus Christ. Folks at the cattle auction in Franklin County knew him as a ‘bright spot’. Full of laughs and always the life of the party, if you didn’t have a trailer, he’d loan you his. As a salesman, he was bold with his testimony. Each year when he received the company’s top salesman of the year award, Ed would change his acceptance speech into ‘an opportunity to share the gospel’. He always said, those awards belong to Jesus because long ago, he gave his business over to the Lord. A descendant of Charles Wesley, Ed’s heart and life song was spent as a member of the Baptist community. A member of Maysville Baptist Church for many years, most folks know Bobbie and Ed as the ‘Greeters at the Front Door’. Ed and Bobbie are easy to spot. They were always there and Ed, “why, he’s the man with the cowboy hat on!” Greeting Dad said is about being faithful. On Wednesdays Ed was faithful to be at the men’s refuge for some time with the men, each year discussing the plans for ‘this year’s game dinner’. He loves his church community and they love him. Ed passed peacefully in his home around sunset this past Sunday. Ed Lindorme, you are a very loved man by all who knows you well. He was a friend and a good Christian giving and forgiving. To tell a man’s character, there can be no greater tribute. In addition to his wife and daughters, Ed is also survived by his brother, Wade Lindorme of Gainesville; grandchildren, Trevor, Chelsea, and Mackenzie Wild; great grandchild, Declan Wild. Funeral service will be held Saturday, January 11th at 2:00 PM from Maysville Baptist Church with Rev. David Sharpton and Dr. Shane Roberson officiating with the interment following at Alta Vista Cemetery, Gainesville, GA. The family will receive friends at the church on Saturday from 12-2 PM. Following the burial the family will have food and fellowship back at The Refuge at Maysville Baptist. In lieu of flowers, donations may be made to Maysville Baptist Church Building Fund: 8875 Hwy 82 Spur Maysville, GA 30558. Little-Ward Funeral Home, Commerce is in charge of arrangements.

The family of Mr. Edward King Lindorme, Jr. created this Life Tributes page to make it easy to share your memories.

Send flowers to the Lindorme, family.