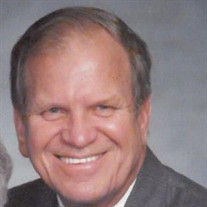 Fred Thomas Hanes passed away peacefully at home on December 27, 2020. He was born on February 27, 1927 in Evansville. IN He was preceded in death by his parents Jack Edward Hanes and Julia Pearl Hanes; and his siblings, Dorothy Jean Hanes, Jack Edward Hanes Jr, Bill Hanes, John Hanes, Jim Hanes, and Thurman (Pete) Hanes. He lost his wife and love of his life Bessie Mae Wilkins Hanes in March of 2012. They were married on June 13, 1948 in Evansville. IN. They lived in Stone Mountain, GA from 1963 until 1992 when they moved to Nicholson, GA. He moved to Apopka, FL in November 2018, where he resided until his death. He served in the Pacific Theater in WWII aboard the USS Tennessee. He was an honorably discharged veteran of the US Navy. After returning home, he initially worked with his dad as a carpenter, met & married Bessie Mae, and was a camera operator for a local Evansville TV station before moving into radio and finally a position with AT&T, where he worked until he retired in 1988. After retiring, he was busier than ever going wherever and whenever they wanted with his bride. He enjoyed woodworking making furniture and taking great pride in his new home in Nicholson with its 5 acres. He enjoyed monthly breakfasts at Cracker Barrel with a group of friends from AT&T. They dubbed themselves ROMEO (RETIRED OLD MEN EATING OUT). He continued meeting with them for almost 30 years until his move to FL. He enjoyed being in warmer weather and made fast friends with Sparky, who was always at his feet. He is survived by his sister, Beverly Ann Hanes of Evansville. IN; his children, Victoria Diane Hanes of Apopka, FL, Phillip E Hanes (Mary) of Tampa. FL and Patricia Ann Phillips (Perry) of Flowery Branch, GA; his grandchildren, Christopher Hanes (Megan) of Ocala, FL, Ashley Hagin (Adam) of Oakwood, GA, Jennifer Hanes of Apopka, Fl, Michael Hanes of San Francisco, CA and Cooper Phillips of Flowery Branch, GA; and 3 great-grandchildren, Caroline Hanes, Copeland Hagin, and Harper Mae Hanes. A private graveside service will be held. In lieu of flowers you may donate to ST Jude’s in his name. This was a charity he believed in and contributed to every month. Little-Ward Funeral Home, Commerce is in charge of arrangements.

Fred Thomas Hanes passed away peacefully at home on December 27, 2020. He was born on February 27, 1927 in Evansville. IN He was preceded in death by his parents Jack Edward Hanes and Julia Pearl Hanes; and his siblings, Dorothy Jean Hanes,... View Obituary & Service Information

The family of Mr. Fred Thomas Hanes created this Life Tributes page to make it easy to share your memories.

Fred Thomas Hanes passed away peacefully at home on December...

Send flowers to the Hanes family.