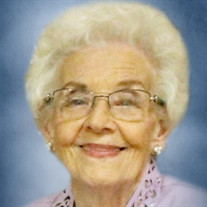 On Monday, January 22, 2019, Hazel Roberta Hayes Carter, loving mother and grandmother, passed away at the age of 90. Hazel was born on June 12, 1928 in Wolfskin, Ga to Joseph and Ethel Hayes. On June 28, 1950, she married the love of her life, F.C. Carter. Together they raised two daughters, Susan and Judy. Hazel spent majority of her life supporting F.C. with his ministry and being a homemaker. She also worked at Waco’s Department Store and Taylors Clothing store for many, many years. She had a passion for gardening, sewing and putting puzzles together with friends. She enjoyed shopping, going out to eat and traveling with F.C. and their church families. Hazel was known for her dedication to her church, Madison Street Baptist Church of Commerce, as well as her quick wit and infectious smile. The love she had for her family, especially her grandchildren and great grandchildren, was pure and unconditional. Hazel or “Nanny” as she was called, held a special place in everyone’s heart, she left an imprint in each grandchild that can never be replaced. Hazel was preceded in death by her parents, Joseph and Ethel Hayes, along with all of her siblings, Guy Hayes, Horace Hayes, Lorene Hayes Dickens, John Richard Hayes, Pete Hayes, Lila O’Shields, Ruby Clements, Marvin Hayes, Thelma Doster, Mary Doster and infants twin boy and twin girl. Also, her husband, F.C. Carter, who passed away in 1991. She is survived by her daughters, Susan (Jimbo) Stephenson of Commerce and Judy (Sam) Stephens of Clermont; grandchildren, Jodi (Jon) Hutto of Commerce; Matt (Janill) Stephenson of Jefferson; Abby Roberts of Clermont; and Adam (Jessica) Stephenson of Commerce. Great Grandchildren, Hayden, Hampton and Hayes Hutto; Carter, Makinley and Britton Stephenson; Jaxson and Analyn Stubbs; Kolbi Lee, Kipton and Kellar Beth Stephenson. Also survived by brother in-law Lloyd Carter of Hull and sister in-law Opal Griffin of Athens. Visitation hours will be held at Little-Ward Funeral Home in Commerce, Thursday, January 24th, from 5:00pm-8:00pm. A funeral service will be held on Friday, January 25th at Madison Street Baptist Church on Madison St. in Commerce at 3:00pm with Rev. Matt McKinney and Rev. Vaughn Howington officiating. Interment will follow in Jackson Memorial Gardens. In lieu of flowers, donations may be made to: Madison Street Baptist Church, 188 Madison Street, Commerce, Ga 30529 Little-Ward Funeral Home, Commerce is in charge of arrangements.

The family of Mrs. Hazel Roberta Carter created this Life Tributes page to make it easy to share your memories.

Send flowers to the Carter family.