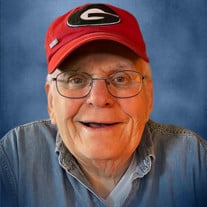 John Samuel Simmons Sr was a devoted husband, father, poppa, brother, uncle and friend. He died on Saturday, November 13th at the age of 74 after a valiant fight with Alzheimer’s. He was ushered into the presence of the Lord while surrounded by his son and his favorite person on the planet holding his hand, his beloved wife of 47 years. John was born on February 17, 1947 in Carlton, Georgia to the late, John Thomas ‘JT’ Simmons Jr and Mary Odessa McCallum Simmons. As the son of a railroad foreman, John regaled his family with fond stories of living on the railroad in various towns throughout Georgia, South Carolina and North Carolina. He graduated with a finance degree from the best school in the country, the University of Georgia, in 1968. He later received a Master’s degree in history from Georgia State University. After graduation, he had a job already lined up for himself with Uncle Sam, a great all expenses paid trip to Vietnam. John served his country proudly in the United States Navy aboard the USS John A. Bole and USS Blueridge. In his grand story-telling nature, John shared countless hilarious stories of his time in the Navy, our favorite being the story about the hijinks that occur with sailors when they cross the equator. Once back home from the Navy and interviewing with Southern Bell, John reported to his prior employer in Athens, A&P grocery store. It was there that he met the love of his life, Carolyn. John had a wonderful career as a telecommunications engineer, working at BellSouth, Nortel Networks and later retiring from AT&T. With their three children, Sammy, Missy and Susan, they built a wonderful life on their farm in Commerce. They loved traveling the world on family vacations. Many Commerce residents will remember John as an avid walker. Religiously through rain or shine, John would walk his routine, three mile walk through downtown Commerce. He was always on the go and couldn’t sit still because, as he loved to say: ‘You can sleep when you are dead.’ As a follower of Christ, John was a devout member of Mt. Olive Baptist Church in Commerce, Georgia. He served in various aspects as a deacon, Sunday School Director and as part of the Mission Committee. John had a love for adventure and travel, going on mission trips around the US and Kenya. He loved UGA football, giving unsolicited advice, growing incredible tomatoes and corn in his garden, banjo-playing, telling funny stories, and a nightly bowl of ice cream. But what he loved the most was his wife, whom he called ‘an angel.’ He was the very best dad and grandfather to his three children, three children-in-law, and seven grandchildren. He was their hero and they adored him for his wisdom, wit, love and dedication. Easter morning won’t be the same without his very early and very off-key rendition of ‘Up from the grave He arose!’ John is survived by his wife, Carolyn Prickett Simmons of Commerce; daughters, Melissa Madden and Susan Goins both of Jefferson; son, Dr. Sammy Simmons of Commerce; sister, Esther Ruth Simmons of Smyrna; and seven grandchildren. Funeral services will be at 2 PM, Tuesday, November 16 at Mt. Olive Baptist Church with Dr. Sammy Simmons and Rev. Verlin Reece officiating. Interment will follow in the church cemetery. The family will receive friends at the funeral home Monday from 5 to 7 PM. In lieu of flowers, the family requests that contributions be made to Mt. Olive Baptist Church c/o Missions Fund, 190 Mt. Olive Church Rd, Commerce, Georgia 30529. Little-Ward Funeral Home, Commerce is in charge of arrangements.

John Samuel Simmons Sr was a devoted husband, father, poppa, brother, uncle and friend. He died on Saturday, November 13th at the age of 74 after a valiant fight with Alzheimer&#8217;s. He was ushered into the presence of the Lord while surrounded... View Obituary & Service Information

The family of Mr. John Samuel Simmons Sr. created this Life Tributes page to make it easy to share your memories.

Send flowers to the Simmons family.