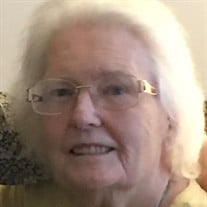 Nancy Stewart Smith passed away peacefully Sunday morning, March 28, 2021 at Bountiful Hills Senior Living Community of Commerce. She was 88, and had been in poor health for some time. Born on July 30, 1932 in Chicago, IL, she was the daughter of the late Thomas Vernor and Nannie Panola (Stewart) Smith. Nancy graduated from George School in 1950, then later went on to earn a bachelor’s degree in social work from Virginia Commonwealth University and a master’s degree in library science from Emory University. She settled in Athens, Georgia and worked as a librarian at the Athens Regional Library for many years. She was an accomplished writer of haiku as well as pursuing many other interests in fiction writing, Jungian psychology and dream analysis. She was a lifetime member of the National League of American Pen Women, and enjoyed meeting with her Athens Writers Association critique group for a number of years. She held a deep appreciation for nature and conservation, and was an animal lover. In addition to her parents, she was preceded in death by her brother, Gayle Smith; her ex-husband, Auvo Kemppinen; and one son, David Kemppinen. She is survived by one son, Roger Kemppinen; two daughters, Diana Kemppinen and Carolyn McGaughey (John); three grandchildren, Michael Flack Jr., Jennifer Danch (Michael) and Christina Flack; and one great granddaughter, Katherine Coomber. A graveside service will be conducted Wednesday, April 7, 2021 at 2:00 p.m. at Grey Hill Cemetery in Commerce, Georgia with Rev. Kathy Lamon officiating. In lieu of flowers, the family asks that donations be made to the Humane Society of Northeast Georgia (humanesocietyofnortheastgeorgia.org). Little-Ward Funeral Home, Commerce is in charge of arrangements.

Nancy Stewart Smith passed away peacefully Sunday morning, March 28, 2021 at Bountiful Hills Senior Living Community of Commerce. She was 88, and had been in poor health for some time. Born on July 30, 1932 in Chicago, IL, she was the daughter... View Obituary & Service Information

The family of Ms. Nancy Smith created this Life Tributes page to make it easy to share your memories.

Send flowers to the Smith family.