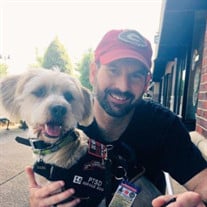 Mr. William Bryant Thomas, age 44 of Nicholson, died Thursday, December 23, 2021 after injuries sustained in a single vehicle accident. Mr. Thomas was born and raised in Commerce, GA. He attended New Hope Baptist Church. He is preceded in death by his first wife, Tonya Ingram Thomas; his brother, Kerry Thomas; and his grandfather who raised him, L.B. Thomas. After graduating from Commerce High School in 1996, Will joined the Army to pursue his dreams of serving his country. He was the honor graduate of his basic training cycle, earned his RANGER tab, and was assigned to Fort Campbell where he served with the 101st Airborne Division 2/327th Infantry Regiment in the HHC Company SCOUT platoon. Will was deployed to Iraq when Tonya died in 2003. He returned home to raise his two children and graduated from the police academy. He went to work with the Commerce Police Department, holding various positions including K-9 officer & supervisor, field training officer, SWAT team, patrol sergeant & supervisor, narcotics investigator, detective, crisis intervention officer, and school resource officer. During this time, Will also attended Thomas University, graduating with his Associate’s degree in criminal justice. Will then went on to complete training to become a Georgia State Trooper, graduating as class president of the 88th trooper class in 2011. Will was assigned to the Gainesville post as a Trooper and later worked on Governor Nathan Deal’s executive security detail before taking a medical retirement in 2014 due to an injury. Following this, Will began studying at Liberty University and graduated in 2018 with a Bachelor’s degree in Business Administration with a minor in Communications. In recent years, he began traveling the country, working on his business endeavors, and passionately sharing Jesus with others. His faithful companion, his beloved dog Dash, who also died in the accident, was always by his side. Mr. Thomas is survived by his grandmother who raised him, Jean Dailey Thomas; his father and stepmother, Raymond and Christine Thomas of Danielsville; his children, Chaz Thomas of Jefferson, Bryanna Thomas of Phoenix, AZ, Ethan Spencer of Commerce, and Madison Spencer of Toccoa; brother, Ricky Cantrell of Canon; sisters, Kimberly Ray of Madison County and Pam Boswell of Commerce; and a host of other family members and friends. Graveside services will be at 11 AM, Wednesday, December 29 at Riverside Baptist Church Cemetery, Maysville with Rev. Jeffery Hicks officiating. The family will receive friends Tuesday from 5-7 PM at Little-Ward Funeral Home. Little-Ward Funeral Home, Commerce, is in charge of arrangements.

The family of Mr. William Bryant Thomas created this Life Tributes page to make it easy to share your memories.

Send flowers to the Thomas family.